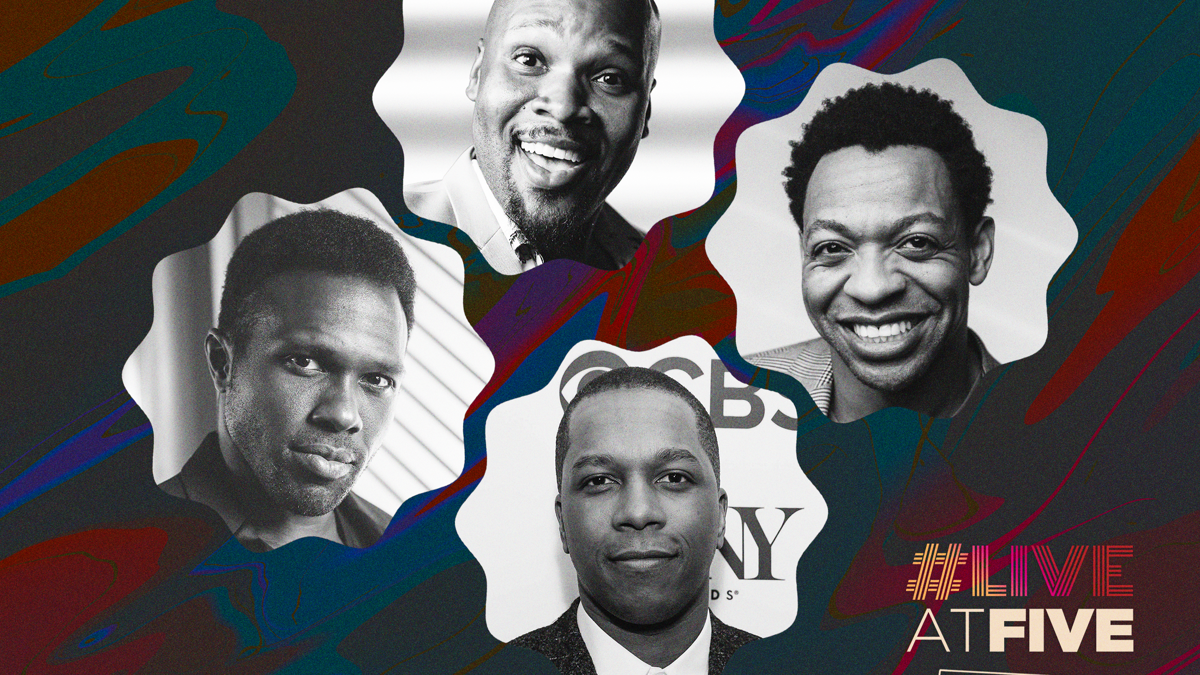 With global protests calling for justice and racial equality, Black Broadway artists are using their voices to promote change. In an effort to keep the conversation growing, Broadway.com invited Aladdin star Michael James Scott to moderate roundtable discussions on Broadway.com’s #LiveatFive. This week Scott was joined by Tony winner Leslie Odom Jr. and Tony nominees Joshua Henry and Derrick Baskin to discuss what its like to be a leading Black man on Broadway.

Odom Jr., who won a Tony Award for originating the role of Aaron Burr in Hamilton, shares how he connects work with his personal life. “I believe that the issues we’re working on in our work, we’re also working on in our lives,” he said. “Things like vulnerability or courage or ferocity. If you want to bring those things to your work, bring them to your life and vice versa. Falling in love and having children affect your work so profoundly because they affect your life. Working on Hamilton, I’ve never been more honest in my work. I had no choice but to be more honest in my life. I was showing up in my relationships and being more honest saying, ‘This is who I am and this is what I deserve.’ That’s what I was trying to do on stage every day and it came out in my life.”

Baskin, who has been working on Broadway for 15 years, has learned the importance of standing up for oneself, even when it’s hard to do so. “You have to live with your decision after the contract is signed,” he said. “You’ll know if you haven’t respected or valued yourself and you now have to do that show eight times a week feeling that way. You have to ask yourself what does this cost me? I don’t think there’s anything worth your self-worth. If you don’t feel valued, I believe you have to walk away. The alternative is being in a yearlong contract mad and with an attitude.”

Like Baskin, Henry addressed the connection between attitude and value. “We’ve been trained to start with, ‘Is anything left for us?’ and to not rock the boat. When you start with respect, it shows you understand the value you put on yourself and your art,” he said. “You have to live with the consequences. There have been shows where I’ve had to walk away because I had a feeling it wasn’t right. I grew up knowing there was a place for me in the world, so then there must be a place for me in art, too. One experience will not define my whole life and I will move on to a place that will value me for who I am.”

Having earned his first Tony nomination for portraying Otis Williams in Ain’t Too Proud, Baskin has a newfound appreciation for being a leading man. “What I love about these characters we’ve done is that they have weight. When I got the opportunity it was great to get to carry something—to hold something. It gave me a challenge, and I knew I was up for it. For Black men, the opportunity to carry is a little bit less. When we are given them, for me, it’s an example for the people behind me and a thank you to the people who were ahead of me.”

“I didn’t grow up thinking I was going to play Aaron Burr, but it was that type of role I was looking for. We started this conversation by talking about the box that Black men are put into, and Aaron Burr was out of the box.”

Prior to Hamilton, Odom Jr. had been seen on Broadway in Rent and Leap of Faith. Stepping into the shoes of the historical figure allowed Odom Jr.—and so many others—to see themselves and their abilities in a new way. “I didn’t grow up thinking I was going to play Aaron Burr, but it was that type of role I was looking for,” he said. “We started this conversation by talking about the box that Black men are put into, and Aaron Burr was out of the box.”

Henry has three Tony nominations and eight Broadway credits to his name, but it was his turn as Aaron Burr on the national tour of Hamilton that gave him a deeper insight into the importance of representation. “I was doing Shuffle Along with an all Black cast and I remember taking pictures at the stage door with kids who look like my niece and my nephew,” Henry said. “Going into Hamilton made me realize that for the first time outside of New York, that experience was going to be possible in the biggest show this generation has ever seen. There were times when I was on the eigth show of the week and I had to be like, ‘Josh, you got this. The voice may not be there fully, but what’s going to shine through is the message that this little child matters, that child knows what’s possible and that child knows that there was someone like them shining.’ That was always in the back of my mind. I get to shine for them.”

Watch the full conversation below!